As long ago as when Venice was an independent republic, the city was defended at the entrances to the lagoon.

The southern tip of the island of Pellestrina was one of the entrances and here in 1880 the Italians built a gun battery. As soon as 1910, it was rebuilt into a new and larger fort, Forte Barbarigo. The armament then installed was four 152 mm. guns manufactured in 1891,which had a range of 12.5 km. The guns were placed side by side and the whole fortification was cast in concrete.

When in 1942 the Germans began to fortify the Italian coasts, these four guns were moved to new bunkers (M272) just southwest of the old fort. In addition to the four guns, the Germans installed anti-aircraft guns and a bunker to house a searchlight (FL277).

The gun battery was never used in combat and can be visited as part of the nature reserve Riserva Naturale Ca 'Roman. 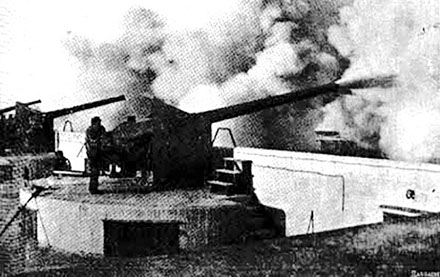