In 1944 there was a demand in Germany for a supersonic wind tunnel. It was important to be able to test components for rockets and airplanes with rapid acceleration, such as the new Me 262 jet fighter.

Therefore at the end of 1944 a group of German engineers began building  a wind tunnel at the city of Ötztal, in the former Austria. The 8-foot diameter wind tunnel, would be able to obtain wind speeds close to the speed of sound.

Water from the Ötztal Ache was supplied through a tunnel and a water turbine drove a hydrodynamic wind tunnel at the foot of the mountain. It is intended that the water-driven turbine should be able to generate 75 MW, which was large enough to obtain the desired effect.

3500 forced laborers, including Russian prisoners of war were put to the task of blowing up, drilling and picking through the rocks to build the plant. They lived in miserable conditions in camps and many died under the inhuman conditions.

The plan was that the wind tunnel should be completed in autumn 1945 and work continued until the end of April, 1945.

All the secret plants that the Germans established in existing mines were code named after sea creatures. The plant at Ötztal was codenamed Zitteraal, or Electric Eel.

In August 1945, all the equipment was dismantled and moved to Mondane in France. Here the wind tunnel was operated by ONERA (French aerospace research agency). The wind tunnel is still in use and is still the largest of its kind. 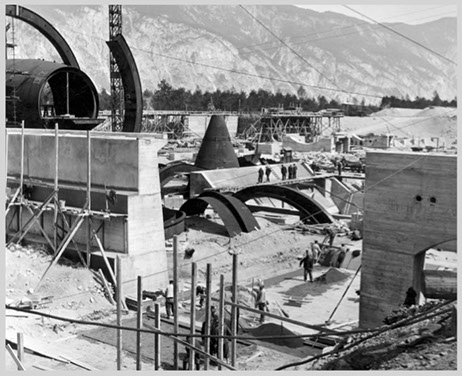