At the end of 1942, German engineers from Organization Todt began the construction of a new headquarters for Adolf Hitler, 4 km. north-west of Pleskau (Pskov) in Russia. The headquarters were placed in a monastery dating from the late nineteenth century. Under the old buildings a bunker (102V) was built and roads, sewers and buildings were upgraded. The headquarters were given the code name Wasserburg and was almost also a castle, on the Velikaya river.

The military situation meant that Hitler never came to Pleskau, which was instead used as headquarter by Northern Army Group (Heeresgruppe Nord).

The headquarters were in use until the summer of 1944, when Pleskau was liberated by the Red Army.

After the war, the buildings served as a military hospital and in 1993, the Russian Orthodox Church took back the buildings which today are still being used as monasteries. 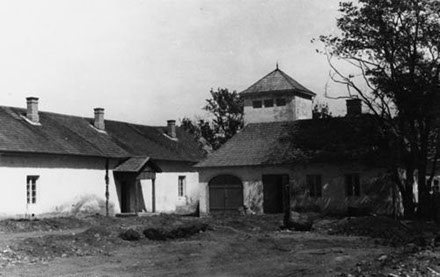