In the summer of 1942 the German army started construction of a gun battery on Veinesodden in northernmost Norway. The five French guns had a caliber of 155 mm. and a range of almost 19 kilometers.

The guns were set in open ring positions cast in concrete, while the crew and ammunition were sited in bunkers behind. The majority of the ammunition was stored in a dump that had been blown into the bedrock.

The battery had a crew of 140 soldiers and was, over the next 2 years, continuously expanded. These expansions included among others an old French Renault FT tank, which still partly exists today.

In autumn 1944, the German forces in northern Norway were pushed further west by the Red Army. After Finland, in September 1944, had signed a ceasefire with Russia a massive withdrawal began. 200,000 German soldiers were involved in Operation Nordlicht (Northern Lights) in which all positions were abandoned, houses, bridges and roads were demolished. Everything that could fall into the hands of the Red Army was removed. 45.000 Norwegians were forced to evacuate and over 10.000 houses, churches, agriculture, schools, etc. were burned. Animals were slaughtered, fishing boats were sunk and over 20.000 telephone poles were felled. In addition, crops were burned and large areas eroded.

As part of this withdrawal, four of the guns were, in October 1944, moved first to Harstad and next to Mele on Andøya. The last gun was, along with other parts of the gun battery, blown up. 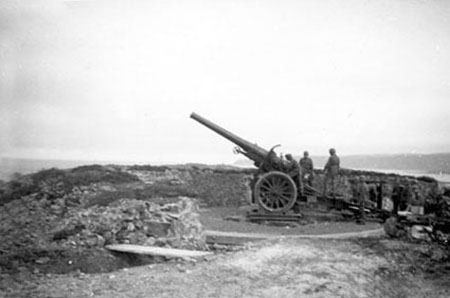 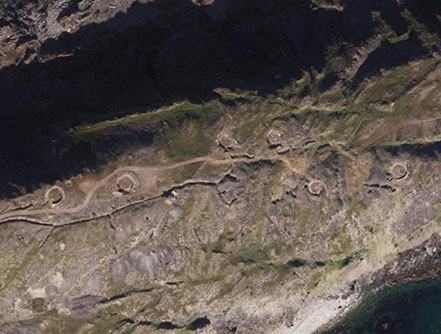