Early in the morning of 1 September 1939 the German battleship Schleswig-Holstein opened fire on the Polish positions at Westerplatte. This was a Polish naval depot, there was located on a small peninsula in the Free City of Danzig. This was the first shot fired in what came to be the second World War.

On the Hela peninsula, 13 miles north of Danzig, the Germans began in building a battery, to be named Schleswig-Holstein, in 1941. This battery was to consist of three 406 mm. Adolf guns. The normal round weighed 2200 pounds and had a range of 26 miles. They were also capable of launching a 1300 pound shell up to 34 miles. Their barrels were 70 feet long, and could fire 250-300 rounds before needing replacement.

The guns were operational in 1942, but the German High Command had already decided to close down the battery and move the guns to Calais. Here the three guns became part of the Atlantic Wall in Gun Battery Lindemann.

In addition to the three gun bunker, the Germans also build ammunition bunkers and an eight-storey high fire command bunker. 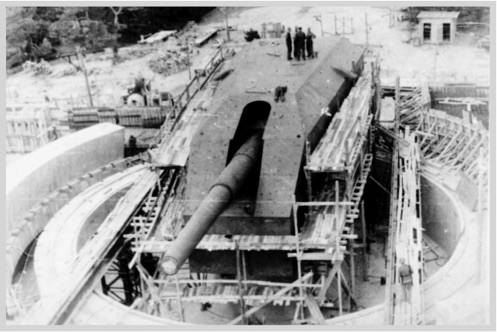