In early November 1940, the Germans began constructing a gun battery, consisting of four 380 mm. guns, at Hanstholm in Denmark. Together with a sister battery in Kristiansand, Norway (Battery Vara), the guns in Hanstholm could command the entrance to the Kattegat. (the channel between Denmark, Norway and Sweden). Using special 1,000 lb shells, each gun battery had a range of 34 miles. A standard shell weighed 1,750 lb. reducing the range to 26 miles. In the middle of the channel, between the two gun batteries, the Germans laid a large minefield.

The last test firing was made the following August, whereupon the battery became operational. Besides four large pillboxes, a large number of other bunkers were constructed in Hantsholm for ammunition magazines, fire control, electrical power, local defense, sick quarters and of course flak (anti-aircraft) guns. The whole area around the gun battery was heavily defended with trenches, barbed wire and minefields.

Today, one of the massive gun bunkers is a museum. 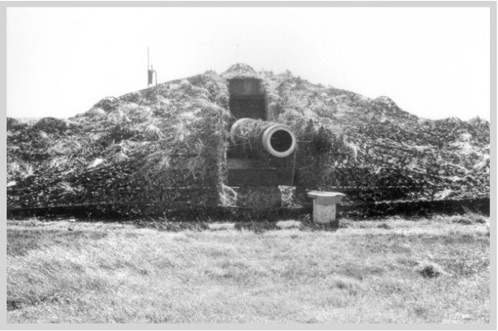