In 1944, the Kriegsmarine (German Navy) began the construction of a coastal battery on the north bank of the Gironde estuary on the Bay of Biscay. The entire area around the estuary was considered so strategically important by the Germans that it was expanded to two fortress: one on the north bank; and one on the south. The “Festung” (Fortress) designation was only used when an area was so strong that it was considered unconquerable. The coastal battery was equipped with four 240 mm. guns, with a range of 26 km. The Germans had acquired the guns following the scuttling of the French fleet in Toulon at the end of November 1942. The guns had previously been mounted on the French warship Condorcet.

The Germans soon began to build bunkers (S542) for the four guns, but after the Allied landings in Normandy and subsequent advance, construction stopped and only two of the guns came to be mounted in Festung Gironde North.  Festung Gironde Süd was so strongly defended that the Allies surrounded and isolated the area instead of attacking it. There were several of these pockets in France and it was not until the middle of April 1945 that the Allied forces mounted an attack. The whole area, including the unfinished battery, was subjected to heavy aerial bombing and shelling by Allied warships. 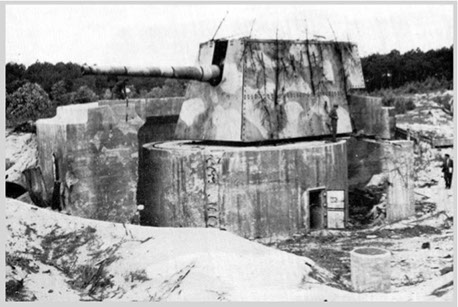 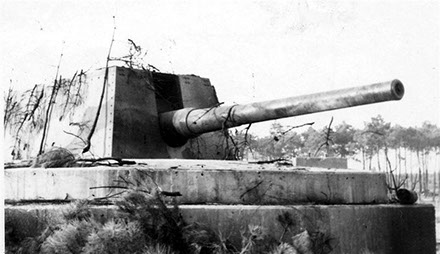