The construction of this gun battery was started in early 1943. The four 122 mm. Russian guns were placed in bunkers (R669), but with the possibility to be moved into cast open-ring positions, thereby obtaining a 360° field of fire.

Although belonging to the German army, the battery was manned by Italian soldiers, who were still under German command.

After the Italian surrender in September 1943, the battery taken over by the Germans.

In addition to the four guns, two 75 mm. guns were used for close defence. These two Yugoslav guns were placed in their own bunkers (R612) protecting the the northern and southern access, together with several machine guns.

To direct fire, a large command bunker (R636) was built and fitted with a range-finder and binoculars for target acquisition.

On the exterior walls, a layer of extra mortar was laid which was shaped to blur the otherwise smooth surfaces.

In August 1944, the battery was attacked and conquered by an attack from the rear  by Allied soldiers from Morocco.

Today, one of the gun bunkers forms part of a new building and a second was demolished during road widening. The last two and the rest of the battery remain visible along the road. 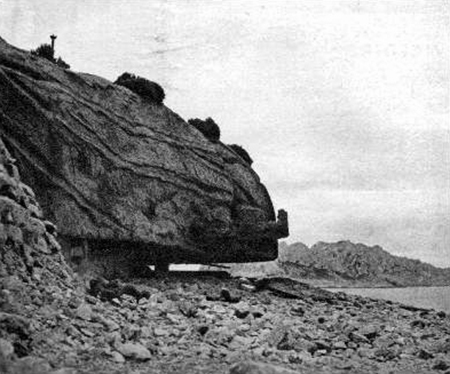