This gun battery was located just north of the entrance to the port city of Bayonne and was one of the southernmost gun batteries along the Germans' Atlantic Wall. Construction commenced in 1942 and the initial armament consisted of four old French 165 mm. guns. In the summer of 1944 these were replaced with more modern German 150 mm. guns.

These 150 mm. guns were developed for the German navy and had been used as secondary armament on the battleships Tirpitz and Bismarck. The guns had a firing range of 24 km. and were installed in pillboxes. The gun battery also had an adjacent 20 metre high fire control bunker, several crew bunkers and anti-aircraft guns.

In September 1944, after the Allied landings on the French Mediterranean coast, the gun battery was vacated and all but the fire control bunker demolished with explosives: it still stands to this day, overlooking the Bay of Biscay. 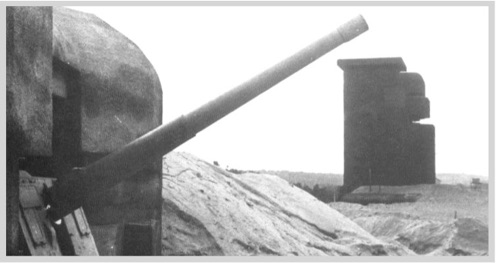