By the beginning of 1944, the Allies had achieved air superiority over Germany and the bombing of the German industrial cities occurred almost daily, both by day (USAAF) and night (RAF). In an effort to ensure that production could continue, part of the German war industry was moved to existing or new mines in southern Germany. The need for space exceeded the space available, so bomb-proof bunkers and road tunnels were also taken into use.

Near the city of Leonberg was the Engelberg tunnel. It was inaugurated in the autumn of 1938 as the very first tunnel built for the German autobahn. The Engelberg Tunnel consisted of two bores, each 1,4 kilometres long, with a height of 12,6 meter and a width of 13.5 meter.

In the spring of 1944, expansion of the tunnel began with an  additional floor, bringing the total production area up to 11.000 square meter.

All the military installations placed in road tunnels were given code names of animals and the Leonberg facility was codenamed Reiher (Heron).

Inside the two tunnels, wings for Messerschmitt 262 fighter jets were fabricated and, besides the German workers and specialists from Messerschmitt, the workforce consisted of forced labourers who were mainly drawn from the Dachau concentration camp near Munich. Next to the building site a camp was built, where the workers lived under desperate conditions.

The finished wings were transported to a temporary assembly plant in the forest at Leipheim airfield. The concept was that the final assembly would take place in a bunker, Weingut II, which was under construction at Landsberg.

The sanitary conditions in the tunnel and the camp were catastrophic, which included no heating, no running water or toilets and workers who became ill were sent back to Dachau, to be replaced by new ones.

After the war, preparation of the tunnels for general traffic began and in 1950, one of the tunnels opened with the second following in 1960. In 1999, a new tunnel opened just south of the old and the original tunnel was now so fragile that it was closed. Today, only some 20 meter of the tunnel is preserved as a memorial to the 389 forced labourers who died in Leonberg. 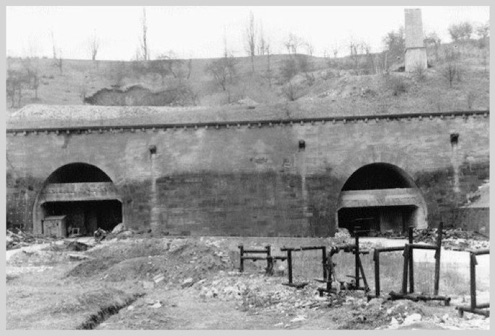