Construction of this gun battery started in 1943, close to the city of Liinahamari in what was then Finland. The battery was originally planned to be equipped with four guns from the Austro-Hungarian battleship SMS Prinz Eugen. This ship operated during the first World War and should not be confused with the heavy German cruiser Prinz Eugen, which was launched in 1938.

Casting of the four-gun emplacement was started in the summer of 1944, but the guns themselves were still at Hannomaq in Hanover. The battery was planned to be operational in the spring of 1945, but after Finland signed a ceasefire with Russia in September 1944, construction stopped when the Germans began a massive withdrawal from all over northern Finland and Norway.

In October 1944, Russian troops occupied the area and after the peace agreement in Moscow, the area was incorporated into Russia at the end of the war.

Today, the four bunkers are in a military area and are periodically flooded. 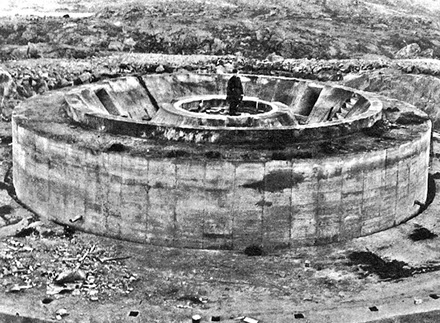