When the Germans conquered Norway in 1940, it gave them a golden opportunity to move their U-Boats closer to the front. Construction of a U-Boat bunker in Bergen started in 1941. The bunker had 3 dry boat pens, 3 wet ones, and one that was used for storage.

It was the Kriegsmarines’ 11th U-Boat Flotilla, transferred from Germany, who made its new headquarters in Bergen.

After the Allied landings in France in June 1944, there was a massive expansion of the U-boat base in Bergen. This led to a massive English air raid in October 1944, involving over 150 aircraft. The attack ended in a disaster when 193 Norwegians, among them 61 children at a nearby school, were killed. The bunker took several hits, but remained intact. Only two U-Boats were damaged.  Later the same month ended another attack without success when the 244 aircraft could not find the target due to heavy clouds. A few planes dropped their bombs, but did not hit the bunker.

The third and last air raid took place in January 1945, when 33 bombers loaded with "Tallboy" bombs attacked the base. The bunker took 3 direct hits. One of the bombs penetrated through the roof, damaged two U-Boats and killed 20 Germans.

As with the other German naval bases, the base in Bergen was named using the German phonetic alphabet. As it was located in Bergen, and ”Bruno” is phonetic for"B," it thus became Bruno.

The bunker is used today by the Norwegian Navy for the repair of submarines as well as storage. 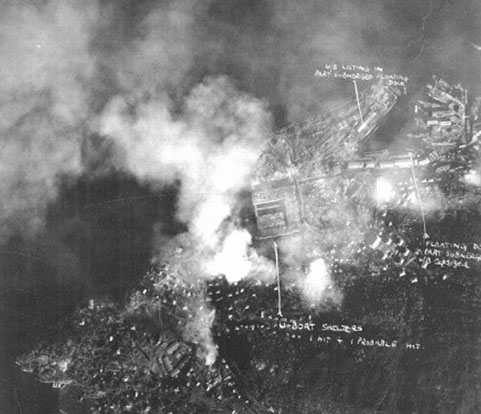 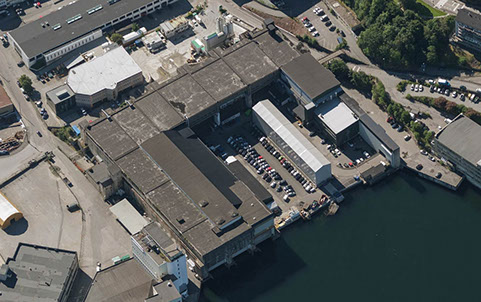 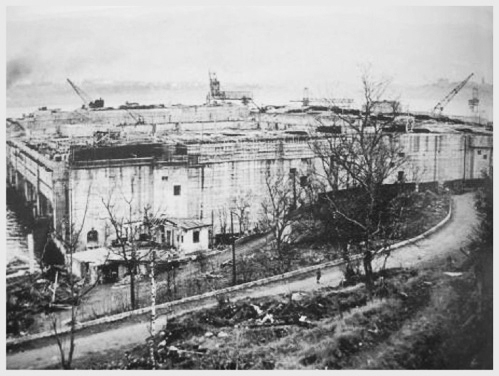 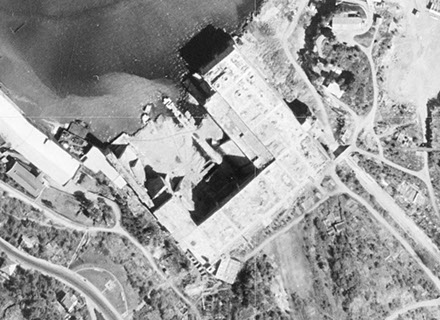 “  I have recently come into possession of my father's WW2 Pilots Log Book and noticed that he flew on a mission on January 12th 1945 to attack the U-boat pens at Bergen with a "Tallboy" bomb.

Having struck the target and headed back to England he noticed 4 Mustangs approaching but they turned out to be 4 109's which shot his Lancaster to pieces as he took avasive action.

The 109's ran out of ammunition as did the Lancaster with damaged hydrologic lines but managed to limp back to England with only one injured crew member, rear gunner - who did recover.

The aircraft had 1100 holes in the fuselage when it was inspected on the ground, the crew were flown back to their Bardney, Lincolnshire base the following day. ”

32 Lancasters and 1 Mosquito of Nos 9 and 617 Squadrons attacked U-boat pens and shipping in Bergen harbor. 3 Lancasters of No 617 Squadron and 1 from No 9 Squadron were lost; the Germans told the local people that 11 bombers had been shot down. A local report says that 3 Tallboys penetrated the 3½-metre-thick roof of the pens and caused severe damage to workshops, offices and stores inside. ”

“  This raid damaged the U864, delaying her departure. She was later sunk by HMS Venturer as she sailed from Bergen to Japan. The British put a lot of effort into sinking that boat and there is a theory that the raid was less about the bunker, and more about U864.  ”

“  The U864 is still at the bottom of the sea west of the Norwegian island Fedje. It is loaded with mercury, and there is discussions in Norway how to best deal with the pollution. The options are to raise the U-boat or to cover it where it is.”