Shortly after the German occupation of Denmark in April 1940, they began to construct an airfield near the village of Rom, south of Lemvig. The airfield was initially equipped with grass runways, only the taxiways being of concrete. Aircraft were parked in earth pens, which had camouflage nets stretched over them and barracks for the personnel were erected nearby.

On 7 April 1941, a British bomber dropped 4 bombs on the airfield, without causing any damage.

In early February 1942 two warships, Admiral von Scheer and Prinz Eugen, left their base in Wilhelmshaven to sail to Norway. During their journey, they were protected by 30 Bf-110 Messerschmitt fighters based at Rom.

In 1943, the airfield was expanded with the casting of concrete bunkers for various functions, including: barracks and lodging (R501, R502 and R622); local defense; ammunition (R607); command (R608); and a hospital (R118).  Expansion of the airfield continued until the spring of 1945, when the last aircraft was transferred to the airfield in Grove and the runways were subsequently destroyed to prevent their use by the Allies.

From March 1945, German refugees began to arrive at the airfield in Rom and initially they were accommodated in the old barracks. The number of refugees increased after liberation in May 1945 and construction of additional barracks accordingly began. The camp was expanded to some 200 barracks, housing a total of 9.000 refugees, the last leaving Rom in early 1948.

The Hospital bunker west of the runway was opened to the public in 1992 and now contains an exhibition about the area. 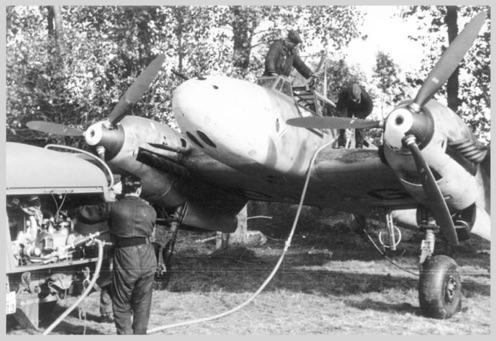