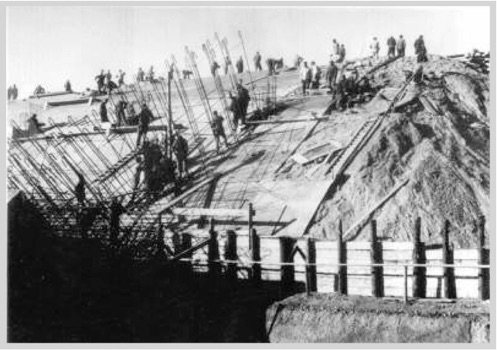 By early 1944, the Allies had gained air superiority over Germany and the bombing of major German industrial cities had become everyday life. In an attempt to ensure that production could continue, a part of the German war industry was moved to existing or new mines in southern Germany. The need for space was increasing and in May 1944 the Germans began to build a large production facility in the woods by Mettenheim. Similar bunkers were also built elsewhere, including in Landsberg, nearly 100 km. west.

The bunker in Mettenheim was designed to consist of a half-buried reinforced concrete vault, approx. 30 meter high and 400 meter long. The roof thickness was 300 cm. and on the top there was intended to be an additional layer of soil. The plan was to produced aircraft engines in Mühldorf for the jet fighter ME 262.

The construction of the bunker was undertaken using slave laborer from nearby concentration camps and was on schedule until late April 1945. By then the U.S. forces were so close to the construction site that it was evacuated and the workers sent on a “death march” towards Munich. On 2nd May the Americans arrived and at this location approx. 200 meter of the bunker was finished. In 1947, the Americans tried to blow up the bunker, but today there remain around. 30 meter of concrete vault, left in the wood.