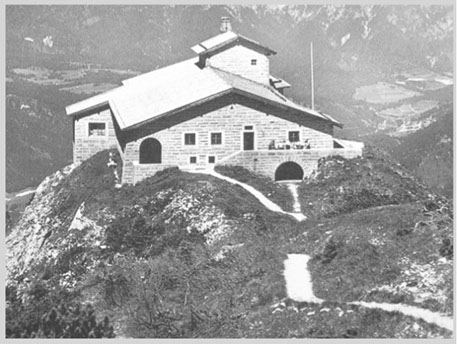 After a holiday in 1923 to Obersalzberg, Adolf Hitler was so impressed by the area that he rented the house known as Haus Wachenfeld in 1928. In 1933 he bought the property and began a modernization of the house, changing its name to Berghof.

Over the following years, the Berghof was luxuriously and comfortably remodeled. In the main living room a window was installed that was nine meter wide and four meter high, in order to enjoy the view. The house was furnished with valuable paintings, tapestries and statues, partly purchased privately by Hitler and partly borrowed or donated from German museums.

The surrounding houses were purchased or seized for other top officials of the Nazi Party and the whole area was cordoned off with barbed wire. In addition to the fencing, barracks for guards, hotels, and an underground bunker system were later built.

In 1938-39 construction of the Eagle's Nest began on top of the Kehlstein mountain, 800 meters above the Berghof. The view from here was intended to impress visiting heads of state and diplomats. The house was finished in 1939 and was donated to Adolf Hitler on his 50th birthday.

A narrow mountain road was dug up to the foot of the Kehlstein. A tunnel into the mountain and a brass elevator lifted the visitors 124 meters verticaly to the house.

The Allies tried to bomb the Kehlsteinhaus on April 25, 1945, but due to poor visibility the attack failed. By contrast, the Obersalzberg with the Berghof and other buildings and barracks were destroyed. The guard staff attempted to destroy the remains before the Americans captured the area at the beginning of May 1945. The ruins were demolished in 1952 and the remains were finally removed in 1995.

Today only Kehlsteinhaus can be visited, and it is possible to use the elevator to visit the place on guided tours or enjoy a meal at the magnificent view.