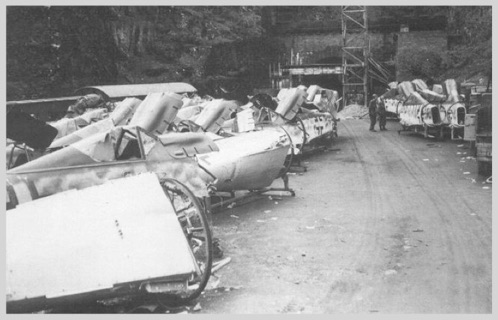 By early 1944 the Allies had achieved air superiority over Germany and the bombing of the great German industrial cities occurred almost daily. In an effort to ensure that production could continue, parts of the German war industry were moved to new or existing mines in southern Germany. The need for space turned out to be far greater than expected, so bombproof bunkers and tunnels were also taken into use.

In the city Schwelm lay a railway tunnel which consisted of 2 parallel tubes. One tube was 935 meters long, and the other 742 meters. A new factory was commissioned there in the summer of 1944, and within three months, the two tunnels were transformed into an underground factory. The rails had been removed, and a concrete floor poured. The tunnels were fitted with cranes in the ceilings, and ventilation was installed.

Between 1.000 and 2.000 technicians and forced laborers worked in the eastern tube (called Linderhausener), performing repairs and modernization of FW 190 aircraft . The western tunnel (called Schwelmer) was used to ensure the flow of materials and labor to and from the factory. All the military installations that were installed in tunnels were given code names for birds. The Schwelm tunnels were codenamed Meise. (Tit)

Production continued until March 1945 with no delays. After the war, the tunnel tubes was cleared and were again being used as a railway tunnel. Today the eastern tunnel is used by the S-Bahn line 8 between Wuppertal and Hagen. The Western tunnel is not currently in use.