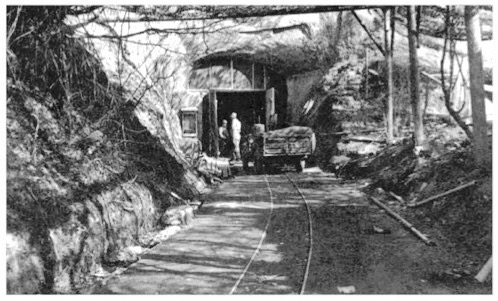 Mining for the mineral Trachyte began in Siebengebirge (the seven mountains) at the village of Koenigswinter in the mid 14th Century. Trachyte is a volcanic rock that was used to make stoves and the city of Koenigswinter was well known for this activity. The city lies on the River Rhine in the south of the Ruhr and eventually the Ofenkaulen mine expanded to approximately 100.000 m².

By early 1944, the Allies had gained air superiority over Germany and the bombing of the large German industrial cities occurred almost daily, both by night (RAF) and by day (USAAF). In an effort to ensure that production could continue, part of the German war industry was moved to existing or new mines in southern Germany.

The Ofenkaulen mine was destined to be used by the Aero-Stahl company for the production of injection pumps for BMW 801 aircraft engines, installed in the Focke-Wulf Fw 190 fighter. Using some 300 forced laborers, production soon started and continued almost up to the end of the war, ceasing in mid-March 1945.  All the plants which were established in existing mines had code names for fish and this one was Schlammpeitzger (Weather Loach) and production continued until mid-March 1945.

In the last months of the war, the local population often used the mine to shelter from the massive Allied bombing raids. The area was captured by the Americans in late March, when British Royal Engineers partially demolished the entrance and production area.

Today the mine contains one of Germany's largest colonies of bats and because of the high risk of collapse and holes after the explosion in 1945, is not open to the public.