In early 1944, the Allies had achieved air supremacy over Germany and the large industrial cities were being bombed almost daily. In an effort to ensure that production continued, the most important parts of the German were industry was moved to new or existing mines in southern Germany.

In the Czech Republic, the Germans started to enlarge the old limestone mine in the city of Litoměřice. They established a camp for slave laborers from Flossenbürg concentration camp there, and about 3.000 workers were forced underground. When they were done, three factories were underground, with a tunnel connecting all three.

In December 1944, Richard I was about 1/3 complete, enough for the Auto Union company to start up engine production. These engines were primarily for the great Tiger Tank. With 20.000 square meters excavated, and 30 kilometers worth of galleries, Richard had now become one of the largest mines in Europe.

Richard II was scheduled to be 15.000 m² in size, to be used by the Osram company. They produced electric lamps for radar systems, and rocket research. Richard III never managed to become operational, but it would have been used as a large oil refinery for the production of synthetic fuel.

There are many who believe that shortly before the war ended, the Germans closed parts of the mine of in order to hide secrets from the advancing Soviets. There are in general many secrets about the underground factories at Leitmeritz. It is said that the leading German nuclear scientist Dr. Hans Kammler took part in the excavations and so there are many theories about a hidden underground research center for nuclear weapons.

Many believe that the mine still hides art treasures from all over Europe including the amber chamber from Leningrad. Many treasure hunters have of course tried to find these artifacts, but much of the mine is still wired with explosives. Even in 1962 an accident occurred where a lurking mining triggered a small amount of poison gas.

Since 1964, the underground space that was Richard II is now used for storage of radioactive material from medicine, research and industry. The warehouse has a capacity of 8.400 m² and is scheduled to be in use until 2070.

The only trace of the concentration camp, built for 18.000 slave labourer, is the crematorium which today is used to commemorate the approximately 5.000 deaths. 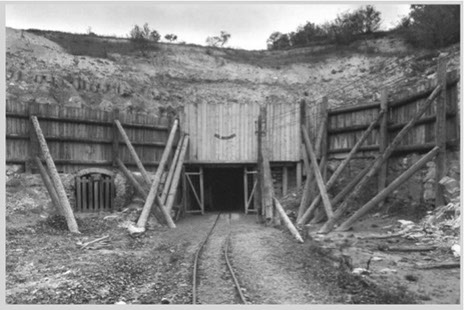