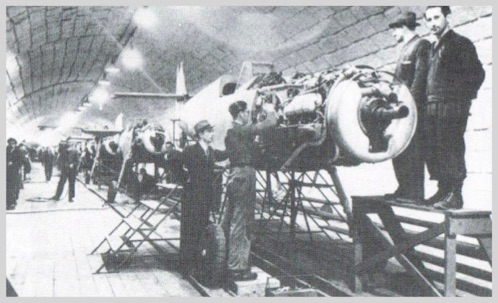 By early 1944, the Allies had achieved air superiority over Germany and the bombing of large industrial cities occurred almost daily (and nightly). In an effort to ensure that production could continue, part of the German war industry was moved to existing or new mines in southern Germany. The need for space was far larger than the available spaces so bomb-proof bunkers and tunnels were also brought into use.

On the unfinished railway line between Brod and Brno in the Czech Republic, there were three tunnels. In the summer of 1944, precommissioning was started and  the first tunnel was quickly turned into a factory for the production of Messerschmitt Bf 109 fighter aircraft. The second and third tunnels were ready later that year and the wings were manufactured there. The company Wiener Neustadter Flugzeugwerke moved part of its production into the tunnel. Around 8.000 slave laborer and German engineers were employed there and Wiener Neustadter was the third largest producer of Bf 109 aircraft, turning out between 7 and 10 machines a day.

All military installation that were located in tunnels were allocated bird names and the tunnel near Brno was codenamed Storch. (stork)

Final assembly of the aircraft was carried out near a small runway in Brno and later moved to the cities Letňany and Kralupy.

The railway station in Tišnova was bombed at the end of April 1945 and on the 9th May, the Red Army arrived. Shortly afterwards, technicians started to gather information and removed the machine tools and aircraft to Moscow for analysis.