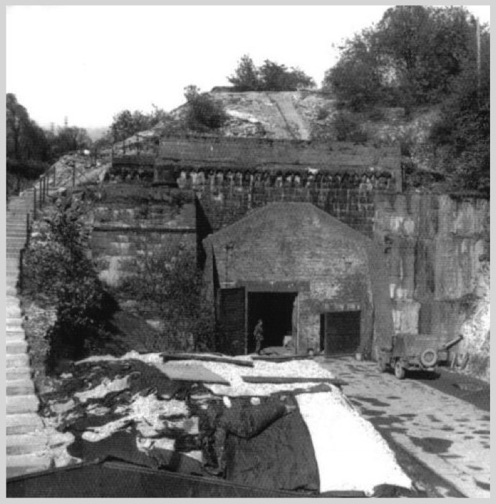 By early 1944, the Allies had achieved air superiority over most of Germany and the bombing of the large German industrial cities occurred almost daily, by night and day. In an effort to ensure that production could continue, part of the German war industry was moved to existing or new mines in southern Germany.  The need for space was far larger than these alone could provide so bomb-proof bunkers and tunnels were also brought into use.

In the city of Lengerich, south-west of Osnabrück, there was a railway tunnel some 765 meter long which had opened in 1871 but had not been used since 1930.

In the spring of 1944, preparations began to use the tunnel as a weapons factory. Rails and sleepers were removed and a concrete floor was cast. An overhead crane was installed under the roof and the ventilation openings were safely sealed against bomb-blast. After only eight weeks the factory was ready and two companies moved in: in the southern part the company "Vereinigte Leichtmetallwerke" produced metal profiles and parts for fighter jets; while the firm "Aldinder" in the north manufactured fuel tanks and other parts for the V1 flying bomb. Where the two companies' facilities adjoined, offices, kitchen, heating, ventilation and a guard room were established.

Production workers and maintenance personnel, totally some 200 in all, were forced laborer drawn from the Neuengamme concentration camp near Hamburg.

All military installations in railway tunnels were allocated code named for birds and the tunnel at Lengerich was codenamed Rebhuhn. (partridge)

Production continued without delay until the very end of the war in April 1945 and shortly thereafter the tunnel bores were cleared and used for mushroom cultivation. In the 1970s, the tunnel was used as a shooting range for a local arms dealer and today it is protected as a monument.