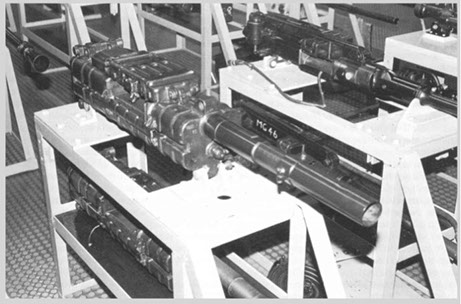 By early 1944, the Allies had achieved air superiority over Germany and were bombing the large German industrial cities almost daily. In an effort to maintain  production, part of the German war industry was relocated to existing or new mines in southern Germany.

In the autumn of 1944, the Germans built an underground factory for the company "Waserflugzeugbau Bremen", which was established in the Lindava mine between the villages of Velenice and Svitava, in the Czech Republic.

The plant would produce the MK 108 aircraft cannon which was primarily used to arm Luftwaffe fighters defending against the American bomber formations.

One hundred years earlier, the mine had been the source of sandstone used in the manufacture of glass. Roadways were between 2 and 4 meter high and went 100 meter deep into the rock.  The total area of the mine was about 3.500 m².

All the military installations which were established in existing mines were given code names based upon animals and Lindava was Nautilus. (Squid).

After the war the mines were used for storage and in 2003 the motorcycle club Hell's Mines moved into the mine. Today, they are open to the public.