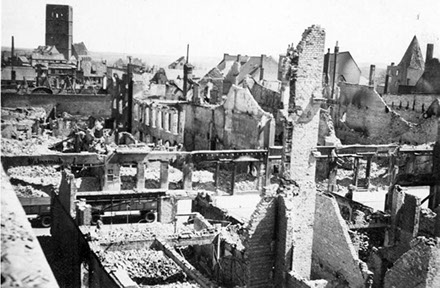 Rostock and Warnemünde in the German part of the Baltic Sea, was a favourite target for air attacks throughout the war. The city's location made it easy to find and had war-important industries, including the Heinkel aircraft factory and, the cities were a major transit point for the German’s connection to Denmark and Norway.

The first air strikes were conducted  in June 1940, another in July 1940 and one in April 1942 followed four major attacks, four nights in a row with the participation of 161, 125, 128 and 106 bombers. The goal was the downtown area and the Heinkel factory in the southern part of town.

In 1943 the German navy built a protective bunker at the port of Rostock. It was type LSB1400 and could provide protection for 1400 persons.