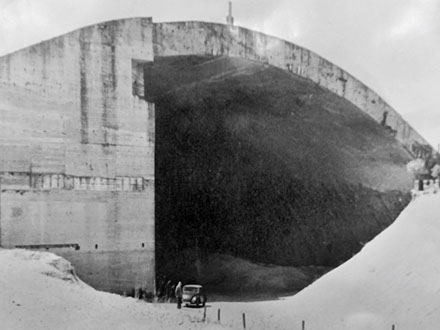 In autumn 1944, the Germans began construction of an aircraft factory located in a forest near Landsberg, 25 miles west of Munich; a similar bunker was built near Mettenheim, 30 miles east of Munich. The plant in Landsberg would consist of a half buried reinforced concrete arch, 790 ft. long and 270 ft. wide, with a height of approx. 100 ft. The thickness of the roof  was to be 10 ft. of reinforced concrete and a further 16 ft. of soil.

It was intended that the facility would be used for production of Germany's newest aircraft, the jet-powered Messerschmitt Me 262.

The plan (Rustungsprojekt Ringeltaube) was to use 90.000 slave labourers , in 3 plants all over Germany, to assemble 900 fighters a month.

For the excavation and casting of these enormous arches, the Germans used slave laborer from the nearby concentration camp at Kaufering, which was a sub-camp of Dachau.

By the end of the war, only the bunker in Landsberg had been cast and this was not even completely finished when in April 1945 the area was occupied by the American army.  In the '50s the new German air force completed on the bunker and it is today still in use as workshop hangar.