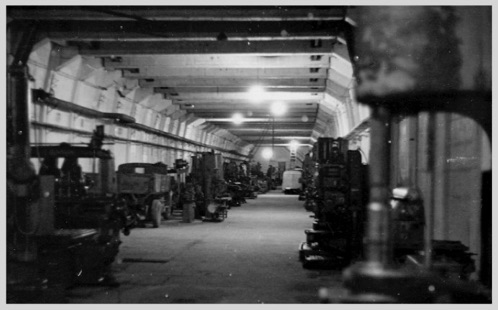 After the Allies had bombed the Pennemünde research center, in August 1943, the Germans decided that the center should be moved underground.

In the autumn of 1943, Ebensee concentration camp was built at the southern end of Lake Traunsee south of Linz in Austria. The camp was a sub-camp of Mauthausen and lay beside a large quarry where the Germans were planning to build the underground research center.

Work started in late 1943 and the first tunnel was ready for operation just four months later. 10.000 workers, most of which were slave laborers drilled and blasted tunnels in the rock wall.

It was therefore determined that the underground facility at Ebensee should be used as a plant for refining of oil instead of research and later also for the manufacture of engine parts for trucks and tanks.

The area, including the concentration camp with the slave labor, was liberated by U.S. forces on 6 May 1945. In the aftermath of the war, the camp was removed by the local authorities. The Allies maintained the oil refining for their own consumption.

There is currently a memorial to the slave laborers and part of the tunnels are open, used to tell the history of the area.