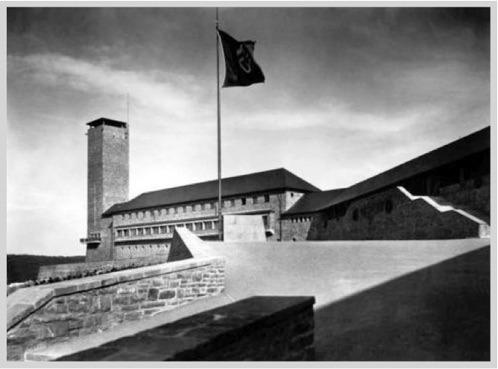 The Nazi hierarchy devoted a large amount of time and effort to indoctrinate the German youth. In the 1930s they realized the need for a training center where the best and brightest could be taught to be the future leaders of the Reich. In response several schools across Germany. Three were built  to look like Medieval castles and were located here, in Pomerania (Ordensburg Krössinsee) and in Allgäu, Bavaria (Ordensburg Sonthofen). A fourth school was constructed on an existing medieval castle called Marienburg in East Prussia (modern-day Poland). Each school would teach a different year of the curriculum.

Ordensburg Vogelsang was located in North Rhine - Westfalia. Construction began in 1934 on a hillside overlooking the entire valley. The school was designed by architect Clemens Klotz, and was completed 2 years later. Vogelsang was responsible for teaching the second year curriculum, and would receive students who graduated from Krössinsee. After the students completed the training here they would continue with their third year at Sonthofen in southern Bavaria.

At the start of WWII, the priority of training the next generation of leaders decreased and the school's primary role became accommodating German army units. Despite this, Hitlerjugend units were still trained for combat here.

An Allied bombing raid in 1944 destroyed part of the school and in 1945 the area was conquered by American troops.

After the war the school was used by the Belgian army as a barracks and as a site for field exercises. The army retired the base in 2006. Today it is part of the Eifel National Park and can be visited.