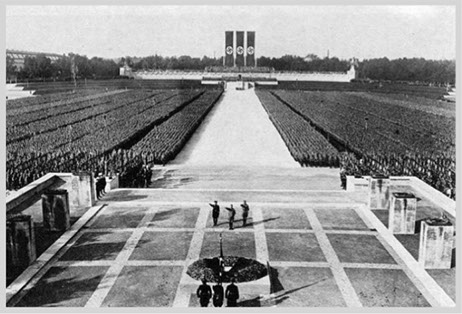 Hitler’s dream of buildings to rival that of Rome, at the height of her supremacy, began at Nuremberg.

The home of the National Socialist Party’s rallies was to have been a study in neo-classical architecture; but only its roadway was fully completed.

Albert Speer’s Deutsche Stadion (German Stadium) would have been the largest sports stadium in the world, with seating for 405.000. The foundation stone was laid on 9 September 1937. Hitler is reported to have commented to Speer that the cost of the stadium would have bought two battleships. Apart from a few further excavations, this was as far as construction progressed.

The Kongreßhalle (Congress Hall) was designed by architects Franz and Ludwig Ruff and would have seated 50.000 spectators. Nevertheless, it is the second largest remaining building of the Third Reich.

The Märzfeld (Mars Field) was designed as the arena for displays of military manoeuvres and war games. Twenty-four fortress-like towers would have surrounded it, connected by grandstands able to seat 150.000.

The Großestraße (Great Road) connected Märzfeld to the Kongreßhalle. It was 2000 meter long, 80 meter wide, and was constructed of 60.000 granite slabs.

Construction and annual rallies stopped at the outbreak of the war.

The area is now used for recreational purposes. That is why today, one can only hear laughter and not the ‘tramp, tramp, tramp’ of boots on the Großestraße.