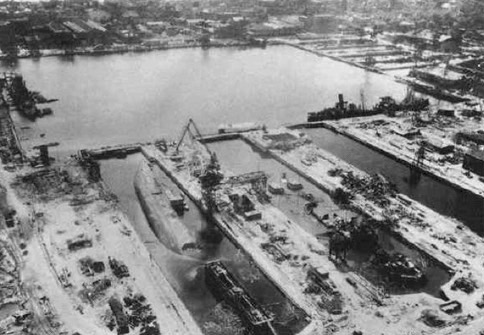 The base was repeatedly exposed to large air attacks, the first in January 1941 and the last in October 1944. One of the biggest attacks took place in February 1943, when 177 aircraft bombed the large ammunition depot in the southern part of the port. Much of the ammunition exploded and the explosion destroyed a large part of the yard and the city.

Already in 1940, the German navy had plans to build a large uboat bunker in the harbor, but with the conquest of France in 1940, these plans were changed. In 1944 plans were again usable and construction of the bunker wespe (wasp) started. The Wespe bunker should produce modules for Germans newest submarine, type XII. The production of this type of uboat was unusual. It consisted of nine modules which was prepared in different parts of Germany. Then the modules was barges shipped to assembly plants where they were welded together and the uboat ready-mounted.

One of these assembly plants were just 50 km. inside the river Weser, namely by Farge. The bunker came never to be completed and the 6th May 1945, it was with the rest of the city conquered by Polish and Canadian troops.