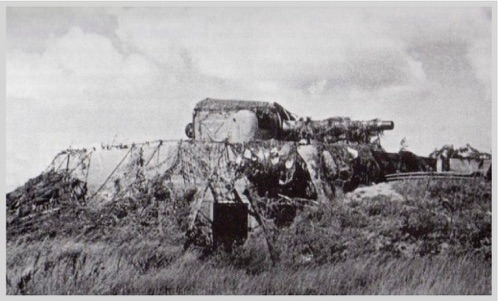 Gun battery Lothringen by Noirmont Point, was the only gun battery on the Channel Island of Jersey, built by the German Kriegsmarine. The guns were four 150 mm. German naval guns from 1917. They were originally produced by the firm Krupp AG for reinforcement of several German warships, including S.M.S. Lothringen. The range of the guns was 18 km and they became operational in the summer of 1941.

The Germans had already planned that these guns were to be replaced with more modern guns, but the new guns never showed up. The old guns from the 1917 remained operational to the end of the war.

In the spring of 1943 the Germans began construction of a large command bunker in two levels. This was completed in summer 1944 and is today open to the public as a museum.

South of the guns the Germans started building a control bunker in 1943, called MP.1 (Marine Peilstand und Meßstellung 1). It was part of a network of bunkers around the island. By using the radar in two or more of these bunkers, the location of enemy ships could be triangulated, which allowed the gunners to more accurately calculate their fire. Nine of these bunkers were scheduled to be built, but only four were completed by the end of the war.