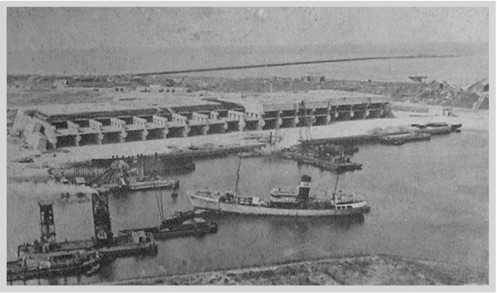 The port city of IJmuiden in Netherland was considered by the Germans to be so strategically important that it was upgraded to “fortress” status (“Festung”). This designation was only used when an area was so heavily fortified that it was considered impregnable.

Besides the defensive installations, the German navy also built two large bunkers to house their Fast Attack Crafts (in English E-boats; in German S-boats or Schnellboot); one of these bunkers was removed after the war. Linked to this was a bunker for the storage of torpedoes.

The southern-most battery consisted of four 170 mm. guns and a command bunker was included in the complex. This has today been turned into a museum.

Behind the command complex were two ammunitions bunkers, together with two pillboxes, a machine gun bunker and an anti-tank bunker, all for local point defense.

The northern gun battery was equipped with four captured French 105 mm. guns built into pillboxes, also with a fire command bunker in the middle.

The gun battery in the middle on the island Forteiland was the core of the whole fortress.  Here, all traffic to and from IJmuiden, and thus also the Amsterdam region, was covered. The old Dutch fortress was developed by the Germans with 34 heavy bunkers including four gun bunkers, two mortar bunkers, a fire command bunker, two artillery bunkers, six anti-tank bunkers, four heavy machine gun bunkers, two depth-charge bunkers and several crew bunkers.

In the 60’s the docks were greatly expanded and much of the bunkers were therefore removed.