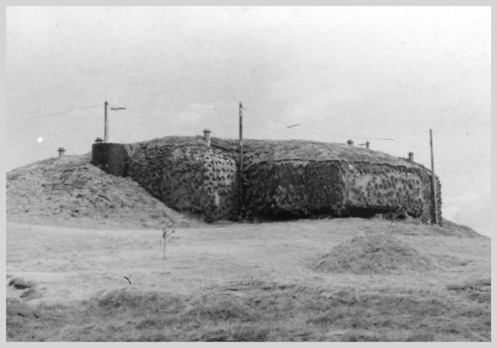 The gun battery was built by the German army and was therefore sited inland from the coast.  As a rule, the army wanted to attack the enemy forces on land  instead of whilst still afloat off the beach. The gun batteries built by the Kriegsmarine (German Navy), on the other hand, were almost all located quite close to the shore as they had more experience and tradition of attacking enemy forces on the water.

In late 1943, the Germans began casting bunkers for the four guns (R611) to in new location closer to the coast. Simultaneously they built a large command bunker (R610) and established several anti-aircraft guns, mortars and machine guns for close defense.

The guns were never fired in anger and were captured by Canadian forces on 12 September 1944. After the war, the Belgian authorities started to demolish the gun battery. Two of the big gun bunkers were removed before the costly work was suspended and in 1999 the area was protected as an historical monument.

Several bunkers are now open and accessible and there is an association that plans to open a museum on the site.