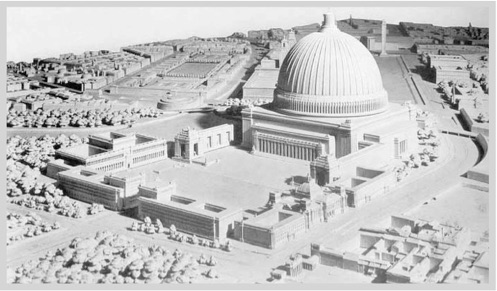 Germania was Adolf Hitler’s vision for Berlin as the capital of the future great German Empire. Developing Germania was planned by Hitler personally in collaboration with his personal architect, Albert Speer.

Germania was scheduled to be bigger and more flamboyant than any other city in history. Thought out down to the smallest detail with infrastructure, buildings and large parade boulevards. The plan was to build a 117 meter high triumphal arch through which the conquering German armies should march.

The planning was so far advanced that the granite was commissioned in Sweden and a foundation plinth was cast in 1941 to see if the ground could cope with stress. French slave labourers built a 12,360 ton, 14 meters high (18 meters below ground) and 21 meters wide concrete block and it is still visible today.

The main building would be the 320 meters high Volkshalle with room for 180,000 people.

The plans for Germania, the new capital of Europe, died with Hitler in 1945.