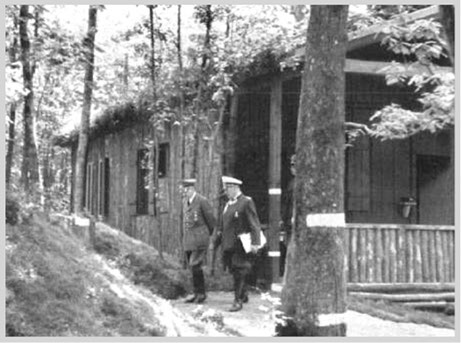 Felsennest (Rock Nest) was Adolf Hitler’s first operational headquarters in World War II. The construction began in 1939 and was conducted under the highest security by Organisation Todt.

The plant was near the small village of Rodert, 30 km. south of Bonn and consisted of four bunkers and three barracks.

Hitler arrived in autumn 1939 to prepare plans for the attack on France and in May 1940, he returned to his new headquarters and stayed here during the campaign in the west. The High Command of the army was situated a few miles away and Herman Göring, Joachim von Ribbentrop, Heinrich Himmler and the Chief of the Reich Chancellery, Hans Heinrich Lammers stayed in their trains close by.

On 6 June Hitler left Felsennest, however, it remained operational throughout the war. In late 1944 Fieldmarschall Walter Model used Felsennest as headquarters during the Battle of the Bulge.

In January, the area was twice exposed to small allied air attacks and in early March the Germans began breaking down and blasting away the entire complex.

The remnants of the blown up bunkers and various foundations and buildings are the only trace left of Felsennest today.