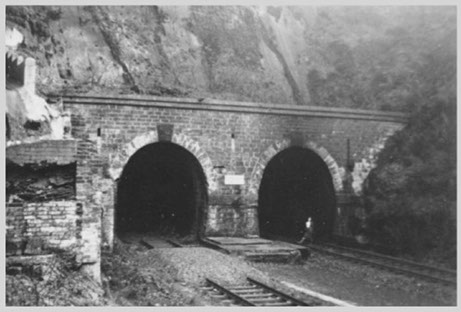 By early 1944 the Allies had achieved air superiority over Germany and the great German industrial cities were bombed almost daily. In an effort to ensure that production could continue, part of the German war industry was moved to new or existing mines in southern Germany and Austria. The need for space proved to be greater than anticipated, so bombproof bunkers and tunnels were therefore also taken into use.

Schee tunnel was a railway tunnel near the town of Wuppertal and consisted of two parallel tubes each 721 meters in length. The tunnels run north-south and they measured 550 cm. in height and 500 cm. in width. The first tunnel was completed in 1884, and the second in 1902.

In the summer of 1944, new work was commissioned, and just three months later, the two tunnels had been transformed into an underground factory.

In the eastern tunnel, 400 slave laborers were put to work constructing components for Me 262 fighter jets. The western tunnel was used as access to and from the factory.

All the military installations that were operating in tunnels were given bird code names. The Schee tunnel was codenamed Kauz, or codger. Production continued until March 1945. After the war, the tunnel tubes were cleared, and served their regular function as railway tunnels until 1984.