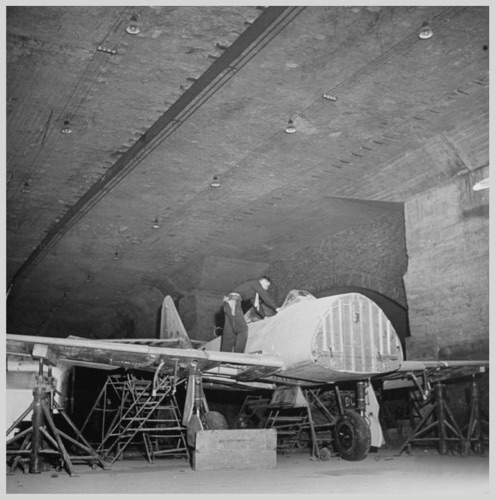 By early 1944 the Allies had achieved air superiority over Germany and the the great German industrial cities were being bombed almost daily. In an effort to ensure that production would continue, parts of the German war industry were moved to existing or new mines in southern Germany and Austria.

The Germans newest fighter was ME 262 and it was decided to build a factory in an old mine in Walpersberg near Kahla in order to produce it.

The factory was named Flugzeugwerke Reichsmarschall Hermann Goering (REIMAHG). All factories built in existing mines were codenamed for fish and REIMAHG was codenamed Lachs. (salmon)

In the Spring of 1944, 15.000 workers, most of whom were slaves, was taken from concentration camps and put to work expanding the existing tunnels in the mine. The tunnels were enlarged and several large concrete bunkers were poured outside the mine. REIMAHG was to become the largest underground factory, almost 150.000 m². On top of the mountain, a 1.000 meter-long runway was constructed.  The facility was laid out so that the finished fighter could be completed in the mine then towed to the runway via ramp. It would then take off, flying 100 km. to a factory where final details would be completed before the plane was operational.There were several underground factories in the area around Kahla that supplied REIMAHG with various components for production. These included  Schneehase in Kamsdorf and Pikrit in Krölpa.

By April 1945 only 27 fighters had left the factory. When the Americans arrived on April12th April , they subsequently finished building five more aircraft. These were, along with drawings and technicians removed before the Soviet troops arrived in the area in July.

In 1947, the Soviet soldiers blow up the many bunkers and the mine entrance. The runway was also removed. Today, there is an exhibition on the area that tell the story and keep alive the memory of the 1.000 slave workers who died at REIMAHG.