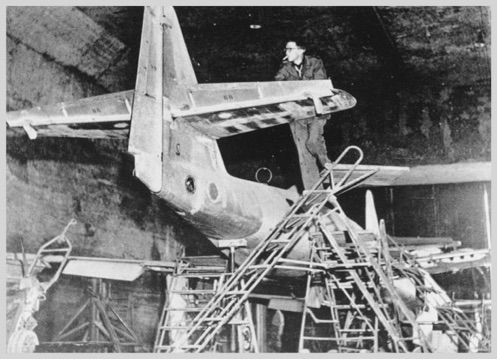 By early 1944, the Allies had established air superiority over Germany and the bombing of the German industrial cities occurred almost daily, by day and by night.

In an effort to ensure that production could continue, parts of the German war industry were moved to existing or new mines in southern Germany. The need for space was far greater than was available, so bomb-proof bunkers and road tunnels were also brought into use.  In the village of Eschenlohe lay the Olympia tunnel. Built 8 years earlier in 1936, it formed part of Reichsstraße 2, connecting Munich with the Olympic Winter Games in Garmisch-Partenkirchen. The Olympia tunnel comprised two tunnels, each of which was extended at the sides and reinforced with concrete. The area between the two tunnels was designed to provide shelter and workshops. The plant produced parts for Messerschmitt Bf 109 and Me 262 fighters.

All the factories that were located in road tunnels were code named after animals and the tunnel at Eschenlohe was codenamed Ente. (Duck)

Production in the tunnel at Eschenlohe continued without interruption until their capture by American forces at the end of the war.