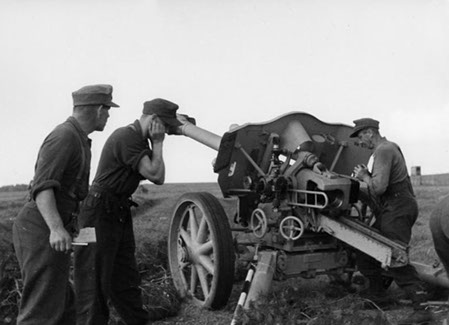 In 1942, the Germans began building an artillery battery behind the coast at the Belgian city of Westende. These four 105 mm. guns were to protect the western entrance to the port of Nieuwpoort. The guns were placed in open ring-positions. Because of the high groundwater levels, all the bunkers were built above ground. However, in order to provide adequate protection, these bunkers were constructed in the strongest manner (Baustärke A) with a thickness of 300 centimeters. As something special, most of the bunkers were built either wholly or partially from concrete blocks, rather than poured concrete. In addition to the gun positions, other bunkers were built for personnel, munitions, and defense. The entire area was fenced in with barbed wire, minefields, and trenches. Because of the groundwater issues, all the trenches were reinforced with brick and they are very well preserved today.

In 1944 the Germans began casting pillboxes for the four guns. This work was not completed by the time the Allies advance called for the withdrawal of the guns. Today there is one gun bunker remaining in Westende.

Those batteries built by the Army were usually located some distance from the shore, in order to bring fire on ground forces. The Navy usually emplaced their guns closer to the shore. They preferred to hit their targets before they landed, and their gunnery program was much more suited to targets afloat.