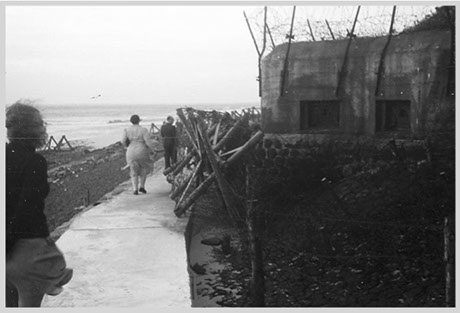 The Germans feared that the Allies would attack them through Holland and at the same time, they wanted to control the traffic entering the English Channel. Therefore, several of the old Dutch gun batteries were used by the Germans. It was primarily the German Navy (Kriegsmarine) who moved to Den Helder, which quickly became one of the German`s most important naval bases in the Netherlands.

The expansion was not as massive, because many of the former Dutch gun batteries were reused and a large bunker for the Germans S-Boats had to be abandoned due to poor soil conditions.

The whole peninsula was cut off from attacks from the south by an east-west defensive line, with anti-tank ditches, minefields, barbed wire, bunkers and trenches.

Near the coast, they built a radar station with associated command bunker (FL250) which would co-ordinate anti-aircraft defense of northern Holland. The old Dutch fort Dirks Admiral, was used in 1942 as a heavy anti-aircraft battery. It was initially equipped with 4 pcs. of 88 mm. guns, but a year later they were upgraded with more powerful 105 mm. guns. The guns were mounted on top of bunkers (FL243) in open positions and later in protective armor domes. Other bunker types built included Command (FL244), Ammunition (FL246), Personnel (M151) and electrical (FL245). In addition, several bunkers from the former Dutch gun battery were also used by the Germans.

Today there is a museum in one of the bunkers.

The German battleship Gneisenau was badly damaged during an Allied bombing raid on Kiel in 1942. Subsequently the main armament, consisting of 283 mm. guns, triple mounted in turrets, was moved to reinforce the German Atlantic Wall. One of these turrets was moved to Gun Batterie Fjell on the island of Sotra, west of Bergen. Another was placed at the Marine Kystbatterie Oerlandet, to protect the entrance to Trondheim. The last one was moved to Hook of Holland.

Gneisenau’s secondary armament from consisted of 150 mm. guns. These were twin mounted in armored turrets and had a range of 22 km. Two of these turrets were sent to Den Helder in 1944, where they were used in Seezielbatterie Zanddijk that was under construction in the dunes just south of town.

The casting of the command (M120) and gun bunkers (M219 went quickly, but only one of the turrets was ready to be built in before the war ended in Den Helder on May 5, 1945.

The Command bunker that was lying between the two pillboxes was removed shortly after the war.

Den Helder was bombed many times throughout the war, mainly because of the German naval activity in the harbor.