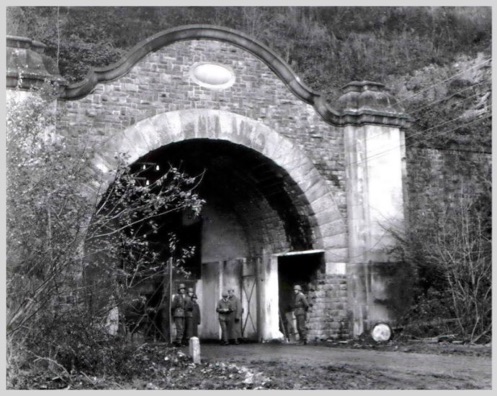 Between 1904 and 1911 the Germans began construction of a railway line between the Ruhr and the Mosel. Between the towns of Ahrweiler and Dernau, they had to make five tunnels and work on these began in 1913. Work came to a halt during World War I and was continued in the early 1920s. Because of the global economic crisis and the occupation of the Rhineland, the railway line was never finished and the tunnels never put into use.

In the 1930s the tunnels were used for cultivating mushrooms. At the end of 1943 they were taken over by the German arms industry. By this time, the Allies had achieved air superiority over Germany and bombing of the large German industrial cities occurred almost daily. In an effort to ensure that production could continue, parts of the German war industry were moved underground.

It was primarily the two longest tunnels, Kuxberg and Trotzenberg which in 1943 were converted into a factory and codenamed Lager Rebstock (Vine Staff). The workers were initially local workers and Italian prisoners of war. Prisoners from Buchenwald were later used as well.

Because of the Allied advances, production was stopped in December 1944. For a short time, the tunnels were used as a shelter for civilians.

In the 1960's, construction of an underground government headquarters in the tunnels was started. In the event of war, this headquarters would house the federal government. The location near Bonn was perfect and the atom bomb-proof facilities were in use until 1997. It is still possible to visit this bunker.