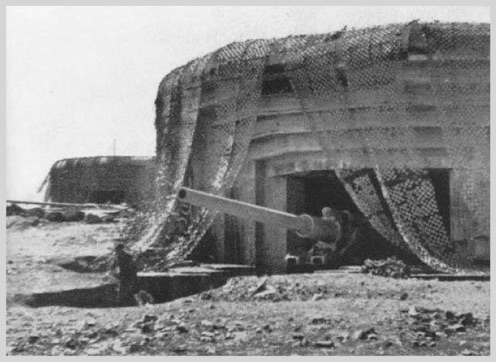 Construction of the battery at St. Marcouf began in 1941. The battery was originally equipped with six 155 mm. guns, but in June of 1944 these were being replaced with stronger, more modern 210 mm. guns. Three of these guns were operational, but only two had been installed in their bunkers on D-day, 6 June 1944.

The Allies had regularly bombed the battery in preparation for the landings that would take place on Utah Beach, which was only seven miles away. The day before the landings, they had dropped 13.000 pounds of bombs on the battery. This assault obliterated all the antiaircraft guns around the position and killed a large number of soldiers.

On the morning of 6 June, when the first American landing craft became visible, the guns opened fire and sank the destroyer USS Corry (DD-463). Heavy return fire from American warships began putting the guns out of action one by one. On 7 June, American ground forces began to attack the battery as well. The battery commander, Oberleutnant zur See Walter Ohms, contacted the nearby Azeville Battery for assistance. The incoming fire broke up the attackers, and repelled the attack. Over the following days, one attack after another was repelled with heavy American losses. Finally on 11 June Ohms was ordered to withdraw his men to the north, abandoning the battery. Ohms managed to reach German lines with 78 of his men and was subsequently awarded the Iron Cross on 13 June.

Today, the battery has been turned into a museum.