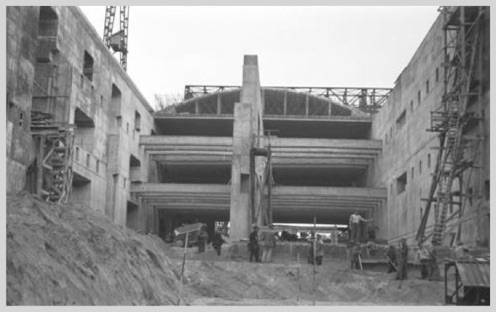 In Autumn 1943, the Germans began construction of a large U-Boat bunker in Farge, 25 km. from Bremen. This bunker was to be used to assemble the German’s newest submarine, the type XXI.

Production of this type submarine was different in that it was made up of nine modules which had been constructed in shipyards throughout Germany. Each module was then transported by barge to the assembly site. Here the modules would be welded together as the submarine was assembled. The bunker at Farge was one of those assembly sites, with space for 16 submarines at a time.

The manpower for building this 430 meter long, 42 meter high bunker was made up of 10.000 men, forced labor from concentration camps. The bunker was nearly finished in March 1945 when 20 bombers left southeast England to attack it with both Tallboy and Grand Slam bombs.

Two bombs penetrated the 7.5 meter thick roof, and halted further work on the bunker. After the war, parts of the bunker were used for storage.

It is estimated that 4.000 of the forced laborers perished during the bunker construction at Farge, due to hunger and exhaustion.