In 1920, Istria became part of Italy and in the following years the Italian  Army continually fortified the peninsula as part of their eastern border area.

Throughout the Second World War, Istria was the battlefield between several armed political and religious groups and the Italian and German forces. After Italy surrended to the Allies in September 1943, the Germans took over the Italian fortifications and expanded several of them.

The waters around Istria were important to the Germans for the transport of troops and supplies from the many small port towns along the coast, to and from Trieste.

At Opatija, the German army began the construction of four gun bunkers (R 679) and a command bunker in late 1943. The gun battery was equipped with 90 mm. Italian guns with a range of 12 km.

After the German withdrawal in April 1945, civil wars wars continued between the various political and religious groups.

The remains of the gun battery are now scattered around a camp-site. 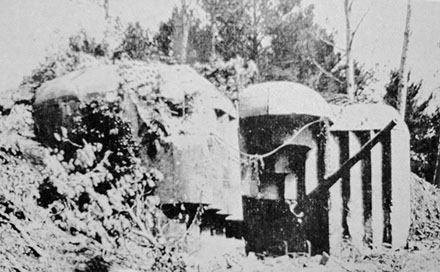