Fortified Front Oder-Warthe-Bogen was started by the Germans in 1934, 200 km. east of Berlin. The Fortified Front consisted of a series of fortifications and bunkers to protect Germany's eastern border with Poland. It was named Ostwall and stretched over approximately 90 km. and besides anti-tank bunkers, it included barbed wire and several bridges and dams. These latter were built so that they could either be withdrawn or hastily burst, thereby flooding large areas to prevent enemy attacks.

Several of the large bunkers were connected via underground tunnels and some passages were large enough to permit new crew and supplies to arrive by train.

Altogether, 160 fortifications were planned but when construction stopped in 1938, only about 60 had been completed. The German fortress builders began instead to build Westwall (called Siegfried Line by the English) on the Rhine opposite France.

In 1942, both the weapons and material were removed from the bunkers and transferred to fortify the Atlantic Wall in the west.  .

In reality, there  was a lack of both equipment and crew and several bunkers were not even manned; in January 1945 it took the Red Army only three days to eliminate the fortress line and those installations which did not surrender or were defeated were simply bypassed. 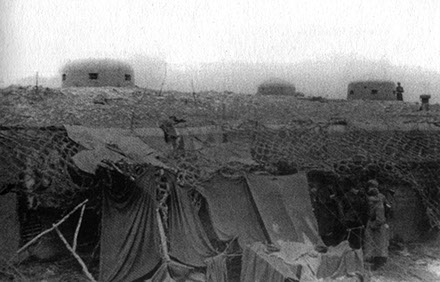